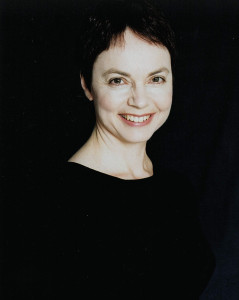 Karen Woolridge began in professional theatre as an actor in 1980. In Toronto, she appeared at Passe Muraille, Factory Theatre, Tarragon and Canadian Stage, among others, as well as major theatres across the country. Favourite credits include Jim Garrard’s Cold Comfort, Videocabaret’s Second Nature, Bryden Macdonald’s Weekend Healer and Rina Fraticelli’s translation of L’Homme Gris. She played Richard Greenblatt’s role in an all-female production of 2 Pianos 4 Hands which toured across Canada and parts of the U.S. Over a 25-year career, Karen played lead roles across the country, also appearing on film and television. She was nominated for an ACTRA Award for playing the title role of a country and western singer in CBC’s Anne’s Story.  (résumé)

At the same time, she worked behind the scenes in film and television, as a production bookkeeper, recruiter for Walt Disney’s classical animation studio, and in business affairs and independent production at VisionTV. She has stewarded ACTRA’s Independent Production Agreement and is currently a Public Relations Officer at ACTRA Toronto. Her theatre production shingle, Johnson Girls, was formed in 1994 to produce The Johnson Girls at the Toronto Fringe. Johnson Girls also produced The Lesson at the KidsVenue at the Toronto Fringe in 2007 and My Treasure Island!!! at Passe Muraille.

Karen’s playwriting includes a one-act original office comedy, Supreme Incompetence, which received a public reading, directed by Kate Lynch, at Groundswell in 2001. Other projects in development include an adaptation of The Ghost of Ellen Dower (table read at Gros Morne Theatre Festival, 2012), and Pattern: Repeat – a multi-disciplinary piece.

Karen has completed a first draft of Patrons and is looking for collaborators.

Johnson Girls engages under the terms of the INDIE 2.1, professional Artists who are members of Canadian Actors’ Equity Association.